Just as with ordinary flex/flock printing, it is possible to print item by item, with one major additional advantage: this technique enables full-colour printing. This means that colour gradients can be achieved in full.
Note: as for all printing methods, there are fixed overheads covering the digitalisation of the logo or 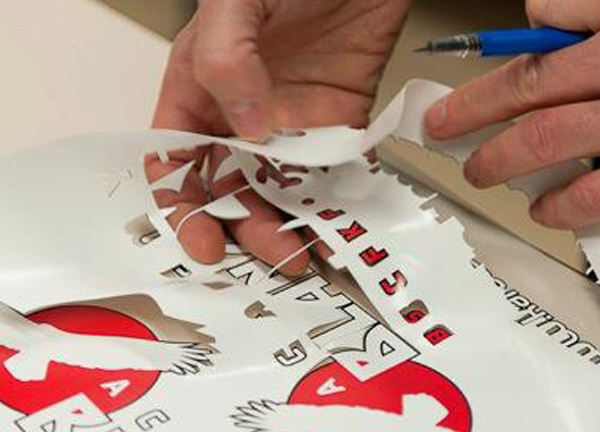 Also known as Print&Cut, this follows the same principle as flex & flock printing but with the possibility of printing several colours (full-colour print) on the required textile with one film.

The principle of Digital Flex/Flock printing can be compared to a paper printer combined with a cutting plotter. But instead of paper, a special polyurethane film is used, which can be printed on using special inks. So special ink is used with this procedure, specifically to be able to print on this polyurethane.

The drawing is sent to the digital plotter by computer. This first prints the image and cuts it out with the knife provided. The image then has to be dried, after which it is virtually ready to use.

Unlike ordinary flex/flock printing, a special application tape has to be used before this can be printed with a hot press.

In the past there were a lot of problems with this technique in terms of how long it lasted, but now a special silicone layer is added to protect the print.